AYESHA SHAIKH: As Pakistan’s ad industry celebrates 70 years of existence, where do you see Pepsi in the brand landscape?
SALMAN BUTT: Pepsi has been integral to Pakistan’s ad landscape. PepsiCo have been operating here for almost 50 years, and during the 80s and 90s, Pepsi was among the first brands to patronise cricket in Pakistan. The campaign featuring Imran Khan, Waqar Younis and Wasim Akram (where they cool down with a bottle of Pepsi) became iconic and is still remembered. PepsiCo have also been at the forefront of showcasing pop music by sponsoring bands such as Awaz, Strings and Vital Signs. This continued with the first Pepsi ‘Battle of the Bands’ which brought forth young pop stars such as Aaroh, EP and the Meekal Hassan Band. Pepsi has contributed extensively in curating the key passion points that define Pakistan.

AS: Why did Pepsi discontinue the Battle of the Bands after one season and what prompted its revival in 2017?
SB: The first season of the Battle of the Bands went on air at the time when PepsiCo were planning the launch of Mountain Dew in Pakistan. It boiled down to a choice between cricket and music and we decided to opt for the former because the sport has a nationwide following. The idea to revive it this year came from our consumer research. The feedback was that people were looking for new faces and new music. In the 90s, dozens of music albums were released every year, but for a long time this has not been the case. This is not because of a lack of talent, but due to a lack of opportunities for musicians to showcase their talent. The question was how could Pepsi best overcome this lack. We explored several options and Battle of the Bands emerged as the hands down winner because it had a strong nostalgic value and the format was such that it not only allowed Pepsi to get back into music, it also encouraged new talent.

AS: What were the challenges?
SB: More than 500 people were involved in the planning and execution. The scale and resources involved and the fact that it was a weekly show, made it hugely challenging. A great deal of time, energy, effort and passion were invested, both by ourselves and our agency, IAL Saatchi & Saatchi, to ensure its success. We faced the most difficulty in deciding which bands to reach out to because the industry is so fragmented. We discovered that multiple people share the copyright for a song and in order to avoid infringement issues, sorting this out was extremely time-consuming. What worked in our favour was that we picked the right team. Faisal Rafi, a Grammy-nominated music producer came on-board, as did Saad bin Mujeeb (he handled the video programming for events such as Pakistan Idol). Selecting the judges was another tough call. Farooq Ahmed, Fawad Khan and Meesha Shafi judged the auditions and Atif Aslam and Shahi Hasan joined the panel in the knockout rounds. The big risk was that the success of the event depended entirely on bands that were virtually unknown entities. Thankfully, the talent we banked on paid dividends. 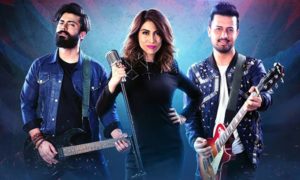 AS: Pepsi’s ‘Liter of Light’ Ramzan campaign has received considerable media and consumer attention. Is this a Pakistan-only initiative?
SB: This is a global partnership with the Liter of Light Corporation. The idea is to provide affordable, solar-powered lighting solutions to off-the-grid areas in countries such as Pakistan. Life comes to a standstill as soon darkness descends; children cannot study and hospitals cannot function. PepsiCo provides funds to Liter of Light Pakistan, which is a non-profit organisation run by Vaqas Butt. The technology was created by Illac Diaz, a social entrepreneur from the Philippines, who inserted plastic bottles filled with water and bleach (to prevent algae growing) in a hole in the roofs of buildings. When it gets dark, the solar panel, powered by an electrical battery and connected to an LED lamp, diffuses light through the Pepsi plastic bottle and into the building’s interior. The ‘Liter of Light’ initiative aims to reach 70,000 people across Pakistan by the end of 2017. People can make monetary contributions or volunteer to join the teams who install the lights. This is a year-round initiative but receives more attention during Ramzan because that is when people give the most and when beverage consumption increases. Another initiative is our collaboration with the Zalmi Foundation (of the Peshawar Zalmi team of PSL) through which we are bringing cricket to the areas that have been most affected by the war on terror. We are also working with local potato farmers to help them grow a higher yield using sustainable agricultural methods. Our rationale for investing in such projects is to create a meaningful difference in people’s lives across geographic and socio-economic divides.

AS: What is Pepsi’s vision going forward?
SB: Most of our brands talk directly to Millennials who want to enjoy life, spend time with friends, and go after their dreams. In Pakistan, opportunities to shine are limited and that is where Pepsi has stepped in to make a difference. The brand’s new mantra is ‘Jee Lay Har Pal’, which is aligned with our objective of creating organised platforms for the young to showcase their skills. Having said this, we also want our product portfolio to evolve to include healthier consumption options, such as beverages with low sugar formulations or snacks with low sodium because this is where consumer demand is moving towards.

March 14, 2018 admin
A decade ago, distracted driving merely meant attending calls, texting, listening to music and touching up makeup while driving. The
brands

March 14, 2018 admin
There’s an estimated 1.1 billion people around the world who don’t officially exist as they were never registered at birth.

Op-Ed: Smart Cities in Africa? It’s not just about ICT